Best Buddies International is an organization dedicated to establishing a global volunteer movement that creates opportunities for one-to-one friendships, integrated employment and leadership development for people with intellectual and developmental disabilities (IDD).

Best Buddies recently celebrated their 25th anniversary, and used this video as part of the entertainment for their gala.

I provided editorial services for this project, as well as some shooting. The video was produced & directed by Matt Mays of Mays Entertainment.

I don’t make a lot of random posts on this blog, but this one really struck me this week. In the past few days I have experienced two really great instances of customer service. The first was with the phone company. I know … who thinks the phone company could have good service? We’re moving our office, changing service, porting numbers, and several other maneuvers which seem to be complex things for the phone company to do. I spent an hour and a half on the phone with two different ladies who listened to what I wanted, explained several options of what I could do, and then clearly explained what was going to happen in the next few days with my phone service. One of them even gave me her direct phone number so that I can call her with any questions and avoid the dreaded automated attendant.

The second was an online service that facilitates logo design contests. We’re working on a new logo for Hi Def Pictures. Anyway, a couple of days after we started up our contest, a representative from the company actually called me. That’s right … on the phone. It was simply a quick call to thank me for my order, see if I had any questions, etc. There was no up-sell, just a merchant checking on a customer and saying thank you.

I suppose you could take it as disheartening that it takes so little to stand out. I mean, all these merchants had to do was communicate with their customer in a meaningful way. That’s it. Pretty simple. But I think it points to the fact that there are some companies who are trying their best to get it right. And now that they have, I’ve formed a solid positive impression of both of them.

So what does this mean for a video production company like Hi Def Pictures? It means if we’ve done business together in the recent past, you should expect a call from me. Want to go to lunch? I promise I won’t try to sell you anything.

We’ve outgrown our Fountain Square studio, so the time has come for Hi Def Pictures to relocate. As of September 1, 2010 we will be in a new office space in Broadripple.
New contact info is below … pictures to come.

Hi Def Pictures partnered with Mays Entertainment to produce this PSA featuring Tony Stewart. The Tony Stewart Foundation is working to raise awareness about cheetah conservation, and to help with the good work being done by the Cheetah Conservation Fund in Namibia, Africa. TSF also helped bring the cheetah exhibit to the Indianapolis Zoo in May, 2010.

The newest exhibit at the Indianapolis Zoo, “Cheetah: The Race for Survival”, opens Memorial Day Weekend, 2010. 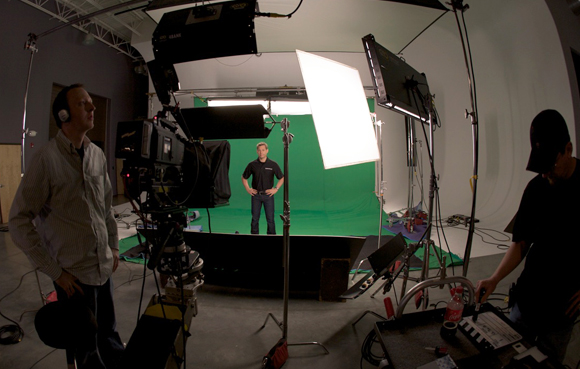 We spent two days in studio this week shooting green screen on camera standups and B roll for iRacing.com, produced by Matt Mays for Innovative. iRacing.com is the world’s leading online race simulation service, and they will soon be opening the iRacing Driving School to help up and coming sim drivers compete with the best. I didn’t get a chance to try out the simulator, but just watching someone else use it was a lot of fun.

Thanks to Innovative for bringing us in for this shoot (and to Conrad for snapping great pics).